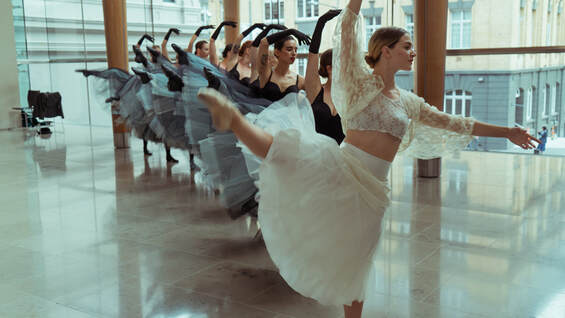 2017 Choreographed Valhalla contemporary dance solo for a graduate of NZSD for their 50th anniversary (MJ was a student there 50 years ago!)
Music: David Lynch. Duration: 7 minutes. Originally danced by Jill Goh

2013 – 16 Continued to choreograph short works to add to the In Flagrante neo burlesque show.

2007 – Time About – new work choreographed on Dorothea Ashbridge and Debra McCulloch, to be performed at TEMPO in ‘Old Yeller.’

2007 – Talking Heads – Reprised with the original cast from 1981 for Tempo Dance Festival.

2003 - Passion – Commissioned by the Auckland Choral Society to create 30 mins of  choreography to be performed at the Trinity Cathedral, Ak interspersed through the ‘St Matthew Passion’ performance by the choir, conducted by Peter Watts. Danced by University of Auckland dance students including Benny Ord and Shanelle Lenehan.

and the 20 years before
​
1998 - Harbour Dance. A contemporary dance work performed at the Auckland Town Hall’s Great Hall with a cast of 35 including 10 professional dancers and 25 children. D  uration one hour

1997 - Romeo & Juliet. A contemporary ballet from the point of view of Juliet - performed at the Bruce Mason Centre, Auckland Oct ‘97 Duration 45 mins

1996 - Giselle. An ‘extreme’ ballet version of Giselle Act 2. Set on another planet. Performed at the Bruce Mason Centre, Takapuna, Auckland. Duration one hour

1993 - Pukeko Pie,with Ponsonby Primary School. Performed at the Auckland Town Hall by all the pupils (310 five to eleven year olds) and MJ O’Reilly onstage as a dancing MC. Duration one hour

1992 – Processions.Created for the Graduates of the NZ School of Dance, and the 25th Anniversary. Music by Don McGlashan and Wayne Laird. Performed at the Wellington Opera House for a season. Duration 20 mins

1990 - Jean. The Ballet of Jean Batten.  A three act ballet with a cast of 30 commissioned for the Royal New Zealand Ballet Company Sesqui celebrations. Premiered at the Aotea Centre and for a season, then toured throughout NZ and shown on TVNZ. Original score by Jonathan Besser. Full length evening work

1988 - Off With Their Heads (Alice),created for Limbs Dance Company. Music by Jonathan Besser. Duration 18 minutes

1986-Tarawera. Performed by Limbs dance Co. Inspired by the destruction of the Pink and White terraces in the Mt Tarawera eruption. Original music by Ivan Zagni. Duration 45 mins

I'd also like to add my collaborations where I was just the choreographer...as they were incredible experiences which added to my knowledge
1992 The Contest with Pacific Theatre and director Justine Simei-Barton
1998 - Cheryomushki with Young Friends of the Opera
1982 Dracula at Mercury Theatre with director Ian Mune
1979 The Unicorn, the Gorgon and the Manticore for Auckland Arts Festival, director Dickie Johnstone